Charitable food donations are a fundamental part of Land’s Sake’s history. Each year, we donate a significant portion of our crops to hunger relief organizations that can distribute our produce where it's needed most.  Our hunger relief efforts provide fresh produce to food pantries, shelters, nutrition and cooking education programs, and food access programs.This produce comes from a variety of sources on the farm, such as subsidized CSA shares harvested each week, a veggie voucher program for Weston seniors, bumper crops, extra vegetables from the Farmstand, unclaimed shares from the CSA tent, and gleaning harvests from our fields. It's our goal that no vegetables go to waste each season.

This tradition started in the 1970s when the Green Power Farm, funded by Weston’s Youth Office, began growing food for lower income families. In 1991, the Green Power Farm came under the auspices of Land’s Sake. At the same time, Weston’s Conservation Commission formally established a hunger relief program. Through this program, the Weston Conservation Commission annually contracts a local grower, who also performs educational work, to grow and donate up to $25,000 worth of produce for local hunger relief over the course of a season.

As the contracted grower for the Town of Weston, Land's Sake's kicks off each season by donating 15,000 pounds of produce to reach the goal of $25,000 -- but we don't stop there. As farm production ramps up, so too do our donations. In the past several years we have donated the following to our partners:

We are proud to be donating produce to the following hunger relief agencies: Boston Area Gleaners, The Community Day Center of Waltham, Community Servings, Lovin’ Spoonfuls Food Rescue, Rosie's Place, the Weston Council on Aging, St. Julia Parish, and the Bristol Lodge. Frequent communication allows us to build relationships with our partner organizations to best understand and serve the needs and preferences of the program participants.

"What a difference it makes when we can offer fresh vegetables in addition to the non-perishable food we give out throughout the year. It is wonderful to see how grateful our clients are."

"Through the food vouchers you give to the seniors in Weston, we are well nourished with good food."

Where your Hunger Relief dollars go…

Thank you for your support, and for helping other families to experience the nutritious benefits of farm fresh, local food. Your sponsorship may be tax deductible, to the extent provided by law, and you'll receive a tax-receipt within two weeks of your donation. 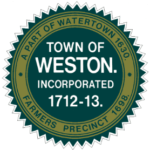 Our hunger relief program is made possible thanks to the  support of the Town of Weston and the Weston Conservation Commission.

Thank you to the Foundation for MetroWest for supporting hunger relief at Land's Sake!